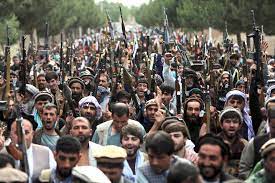 With American and NATO troops having all but departed Afghanistan after 20 years of war, the country is still riven by internal conflict.

The United States descended on Afghanistan and its Taliban government in 2001 in the wake of the 9/11 attacks by Al Qaeda, which had sought sanctuary in the country.

Now at the end of the war, this is a look back at how it began, the complications that arose, and how it came to an ignominious end.

On October 7, 2001 – less than a month after the September 11 attacks that killed about 3,000 people in the US – then-president George W Bush launched Operation Enduring Freedom in Afghanistan.

The ruling Islamist Taliban had been sheltering Osama bin Laden and his Al Qaeda movement, which carried out the attacks in the US.

The operation opened a military front in the US “war on terrorism” and within weeks, US-led forces overthrew the Taliban, who had been in power since 1996.

How the Taliban rode it out

In 2003, US forces waded into another conflict, the Iraq War, to oust dictator Saddam Hussein.

With US attention diverted, the fragmented Taliban and other Islamist groups regrouped in their strongholds in the south and east – from where they could easily travel between their bases in Pakistan’s tribal areas – and launched an insurgency.

In 2008, US command in Afghanistan called for more manpower and Mr Bush sent additional soldiers, bringing the total to 48,500 US troops deployed.

Two years later, Barack Obama had boosted the US presence there to about 100,000 troops, despite being elected president after a campaign that promised to end the Iraq and Afghanistan wars.

The objective of the push was to crush the expanding Taliban insurgency and strengthen Afghan institutions.