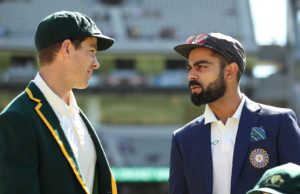 Virat Kohli’s side poised to remain in the box seat of new ICC competition designed to bring greater context to Test cricketEven a perfect Test summer for Australia is unlikely to see them move to the top of the World Test Championship (WTC) this season after world No.1 India opened up a significant early lead in the new competition.

After years of planning and several false starts, the first running of the WTC began in August as a way of bringing greater context to Test match cricket. Each nation now plays Tests for points in a two-year cycle that will culminate in the WTC Final in England in June 2021, a competition that runs alongside the bilateral series that have always provided the backbone of the game’s longest format.

And Virat Kohli’s India, the world’s top-ranked Test nation, have started the WTC in such a dominant fashion that they appear unsurpassable until next year at the earliest.

India currently sit on top of the standings on 240 points, well clear of New Zealand and Sri Lanka (both on 60 points) and Australia and England (both 56 points), having won five Tests out of five – two against the West Indies and three against South Africa.

The only team with any chance of chasing down India in the coming months is Australia, who will play five Tests this home summer, two against Pakistan and three against New Zealand.

But even if Tim Paine’s side win all five Tests to move to 296 points, they’d need India to go winless in the upcoming home series against Bangladesh in order to move to the top of the standings.

India will play two Tests next month against the ninth-ranked Bangladesh, who this week narrowly avoided strike action by its leading players. Victory in both Tests will hand Kohli’s side a further 120 points, while just one win will still guarantee they finish the year on top of the standings.
The complicated WTC points system has been the subject of much debate, with a total of 120 points on offer in each series and distributed based on how many matches are played. For example, a win in a two-Test series is worth 60 points, a win in a three-Test series is worth 40 points and so on.

The unbalanced points system is a case of the new World Test Championship clashing with more than 140 years of Test history.

Countries like Australia, India and England have historically played more Tests and longer series than other nations, with series consisting of four or five Tests a common occurrence. Sides like Sri Lanka, on the other hand, have never played a series longer than three matches in their 37-year history as a Test team.

The reality is that Test cricket remains incredibly popular with fans, and vastly more lucrative for broadcasters and administrators, in countries like Australia and England compared to the likes of Sri Lanka, New Zealand and Bangladesh.

The realities of the global game left the ICC with three options when implementing the WTC.
Source: Cricket.com.au