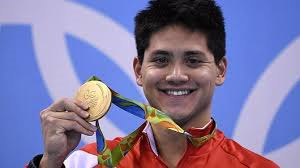 Schooling’s time smashed the Olympic Games record of 50.58s, clocked by Phelps at Beijing 2008. This is the first time at Rio 2016 that Phelps, who won the 100m butterfly at the past three Olympics, has been beaten.

This is also the first ever gold medal by a Southeast Asian male swimmer.

“It feels great, it kinds of feels surreal right now, it’s crazy,” said Schooling after the race. “I really can’t describe how this moment feels. All the adrenaline is running through my veins right now. It’s a dream come true.”

“I’m really honoured and privileged to swim alongside some of these great names, people who changed the face of our sport,” he added.

“I can’t really tell you how grateful I am to have this chance to swim in an Olympic final and to represent our country.”

“I’m just ecstatic. I need it to sink in.””I’m going to have to pinch myself to see that I’m alive,” said Colin Schooling, who watched his son make history from a viewing party in Singapore.

“Singapore, he did what you all wanted and he did it in style,” he added, visibly overwhelmed with pride.

He said a world record could be next. “The most important thing is to be an ambassador for all our children in Singapore that gives them hope that they also can do it. There’s nothing special about him, just a boy who is interested in the sport.”

Also celebrating Schooling’s success was his mother, May Schooling, who said she had “no doubt that this day would come”.

Mrs Schooling thanked those who supported him – including the Singapore Swimming Association, family friends, the Singapore Sports Institute and the Defence Ministry for allowing him to defer his National Service, so he could continue training for the Games.

“We were screaming,” said Mrs Schooling. “But I think it also shows that if we give Singaporeans the chance to pursue (their goals) and train properly, we can reach the top of the world. He has proven it – you can do it.”

Schooling was the fastest semi-finallist a day earlier and had also won his heat on Friday, pipping Phelps in the process.

The 100m freestyle and 200m butterfly were Schooling’s other events but he withdrew from the latter and missed out on the finals for the former.

The Singaporean’s groundbreaking Olympic feat follows his bronze at the 2015 World Championships, which was also a first-ever podium finish for his nation.