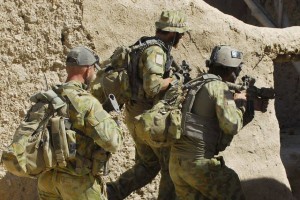 The former director of military prosecutions says she charged two Australian commandos after the deaths of five Afghan children because the soldiers threw grenades into a room knowing the victims were inside — a claim soldiers strongly deny.

The allegations revealed in a newly released government document reignite questions about the deaths of the children and man in a February 2009 raid by Australian forces that went horribly wrong in Oruzgan province.

Two Reserve commandos — a sergeant and a lance corporal — were charged with manslaughter over the raid by the former director of military prosecutions, Brigadier Lyn McDade.

The charging of the men sent shockwaves through the Australian Defence Force (ADF).

Subsequently, the charges were dismissed prior to a court martial, but the case remains one of the most controversial chapters in Australian military history.

The new allegations are documented in a memorandum dated September 23, 2011, which was sent by Brigadier McDade to former defence minister Stephen Smith after the minister asked the brigadier for a full account of the failure of the charges against the men.

It surfaced as a result of an investigation by Australian Story and was obtained under Freedom of Information legislation.

Soldiers ‘knew for certain’ about women and children: prosecutor

For the first time, the document sheds light on the basis for the former director of military prosecutions’ decision to lay charges against the men.

The two soldiers charged with manslaughter were identified as Sergeant J, who gave the order to detonate two grenades, and Lance Corporal D, who threw both grenades.

Brigadier McDade details what she described as “the fundamental issue” that underpinned her decision to lay charges against the two soldiers.

“They chose to deploy grenades, an indiscriminate weapons system, into a very confined space, when they ought to have known, and during the attack knew for certain, that women and children were present,” she said.

Brigadier McDade says that after the first grenade detonated “… the evidence discloses that Sergeant J and Lance Corporal D knew for certain that there were women and children in the room. They both provided statements to the inquiry officer to this effect; specifically that they could hear the women and children screaming from inside the room.”

The brigadier’s account is denied by Lance Corporal D, who has told Australian Story: “I absolutely refute the submission made by Brigadier McDade that we were certain of women and children in the room.

“There was a great deal of noise.

“We didn’t believe there would be any women and children in that room for two reasons, that being that we had already found who we believed to be the family living in that compound and removed them from an earlier room. And, secondly, that we were now receiving gunfire from that room and we believed that we had found the insurgents that we had been told were staying there.”

“I read all the statements made by Lance Corporal D and did not see anything in which he said that he knew for certainty that there were women and children in the room,” Mr Hyde said.

“The assertion that Lance Corporal D knew with certainty that there were women and children in the room before or during when grenades were used is wrong.

“Lance Corporal D did not know there were women and children in the room until after the shooting stopped and he entered the room.

“The only thing that he knew for certain in those chaotic moments was that there was someone in the room firing an automatic weapon at him and his fellow soldiers.”

Based on statements that Brigadier McDade says were given by the soldiers to an inquiry officer, she also alleges that on hearing the cries of women and children a non-commissioned officer countermanded the order to fire a machine gun into the darkened room.

She does not provide specific details or the timing of this countermanding order.

Many of the documents, including statements made by soldiers involved in the raid, have been classified as SECRET: AUSTEO (Australian Eyes Only) and others have been suppressed by court order.

Without the release of these documents, verification of all accounts remains difficult.

Although the then-chief of defence Sir Angus Houston gave a commitment to give a full account of the incident to the public when the inquiries and court martial were completed, the ADF never told the whole story of the events of that fateful night, including details of whether or not the raid was properly authorised.

A third soldier, Lieutenant Colonel M, the commander who authorised the raid from Kandahar, was also charged with failing to comply with an order and prejudicial conduct.

Why charges against officer were dropped

Equally controversial in the memorandum to the then-defence minister Mr Smith is Brigadier McDade’s account of why charges against this officer were dropped.

The raiding party had set out to capture or kill a senior Taliban leader and, drawing a blank in the first compound they entered, they then moved to a second compound.

These compound raids were subject to mandatory regulations drawn up by International Security Assistance Force (ISAF), the international coalition fighting in Afghanistan, after consultation with the Afghan government amidst mounting concern over civilian deaths in the long-running war.

Based on evidence provided to Defence investigators, Brigadier McDade alleged that Lieutenant Colonel M was in breach of the mandatory ISAF Standard Operating Procedure 309, which regulated the circumstances in which coalition forces may enter compounds. These operating procedures, she says, were designed to ensure that innocent Afghan nationals in their homes were not wrongly targeted.

However, Brigadier McDade says she decided not to proceed with the prosecution of Lieutenant Colonel M after a number of senior officers provided evidence to their Defence counsel that varied from the statements first collected from them by the ADF Investigation Service (ADFIS).

The ADF has never provided an account of why the second compound was raided.