A new study suggests the dingo’s origins can be traced to somewhere between South-East Asia and China. 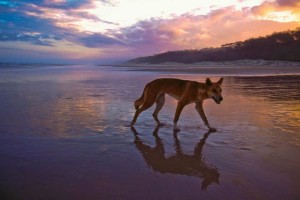 The study reviewed past academic evidence to shed light on the native dog’s origins, and posits dingos probably came to Australia via Indonesia.
Dr Melanie Fillios from the University of New England said confirmation could come from investigation of ancient DNA contained in archaeological remains.

“If we find archaeological dingoes of around three to 5,000 year age all along that route throughout South-East Asia, that will give us a really good view of when dingoes arrived in Australia and where they came from,” she said.

“So collecting ancient DNA is the next step. That has never been done.”

That research will go forward once the outcome of a funding proposal with Oxford University in the United Kingdom and Max Planck University in Germany was approved.
Entry pathways scrutinised

Dr Fillios and colleague Professor Paul Tacon examined past theories on potential entry pathways for dingoes between South East Asia and Australia, particularly where they overlap.

“We found that that there is a commonality between four of those studies that show an origin in Southeast Asia, more toward China.”

The most likely route followed a trail through west Malaysia, the Indonesian island Sulawesi and then into northern Australia.

The analysis led to the belief that it’s unlikely the dingo came to Australia as a result of an expansion of farming communities who took an eastern route from Taiwan, through the Philippines and Papua New Guinea, according to Dr Fillios.

“When we look at just the genetic evidence it suggests that it’s unlikely dingoes came that way.

“When we start to combine it with the archaeological evidence, even more so.”

Dr Fillios said dingoes don’t have a gene that digests starch, so it was even more unlikely they interacted with agricultural communities.

“So we can begin to look archaeologically at the the hunting and gathering groups that follow our hypothesised genetic route,” she said.
Source: ABC/ Queensland Government